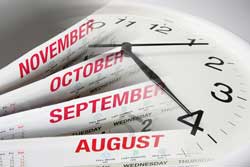 It also means that the idea that there is some paced timeline of milestones that are spread  throughout the high school years for softball recruiting is smashed to smithereens outdated. Of course, there are still some published dates on when things can “formally” happen. But how much do they really matter in college softball recruiting? When D1 softball players are on average making verbal commitments during their sophomore year, how important is it to know when you can sign the National Letter of Intent (NLI).

The only official timelines softball players and their families need be really concerned about is the recruiting calendar. These are the rules that regulate when during the year coaches can have contact and what kind of contact with players. These calendars change each year so players should refer to them before planning any unofficial visits to avoid disappointments.

You will probably start early

Now the reality is that if you’re going to play D3 softball, you don’t have to worry about deciding on which college to attend before you get your driver’s license. No athletic scholarships, limited recruiting budgets, and no NLI all mean that D3 coaches have little reason to start recruiting before players’ junior year.

The problem is that very few softball players enter high school thinking they’re going to end up at a D3 college. And that’s not just because of unrealistic expectations. Even among females, players have been known to make tremendous development leaps in high school. Your eighth grade playing ability is not destiny.

Unfortunately, it does mean that unless you know you want to play at a D3 college, you will probably find yourself starting the college recruiting process just as early as everyone else in softball “just in-case.”

But there are no guarantees

However, keep in mind there are no certainties. Jumping early out of fear that there won’t be more or better offers coming  means you’ve just increased your chances of the head coach leaving before you ever attend your first class. Approximately a quarter of D1 athletes who committed as freshman had a different head coach by the time of enrollment. Make sure you’re committing to the school.

And while they’re in the minority, the NCAA survey found 7% of D1 Softball athletes did not verbally commit before signing the NLI. Another 15% didn’t commit until their senior year. That means around one in five D1 softball players managed to avoid the early stampede. Of course, there is no way of knowing if this was by choice or by chance.

All of this brings us back to the fact that the college softball recruiting timeline starts ridiculously early. And for those looking to compete at the D1 level, it can be compressed into a matter a few short years. Therefore, consider the following more of a checklist than a timeline.

I tried to create three different timeline tracks depending on your playing level. However, so much will depend on each player’s individual circumstance. Therefore, take the grades as loose guidelines and adapt it to your personal timeline.