When is it too late? When do you know that you should give up on playing D1 and start looking elsewhere because you haven’t heard from any coaches? While there will always be those who say “never say never” right up to the moment they find themselves enrolling in whatever last minute college they could get into, the truth is that most athletes are willing to face reality and move on once they know when. The questions is when is “when?” Thanks to an NCAA Survey completed last fall, athletes have a better estimate of “when” for most sports.

Before going into the “when” indicators, let me just get this off my chest-this data indicates that early recruiting is pervasive in the majority of D1 sports. As far as I’m concerned, the fault lies with coaches who just can’t seem to bring themselves to be the adults in the room.  Remember, early recruiting started with non-revenue sports, so don’t blame money for this.

When Should Athletes Expect to Hear From D1 Coaches

Ok, enough. I’ll start talking about when D1 recruiting happens. Just keep in mind, some sports such as Lacrosse are changing their recruiting rules so this can change.

The NCAA surveyed 14,057 domestic recruited D1 athletes in September of 2017. You can see the complete report here. The information high school athletes are probably most interested in is when the college athletes said they were first contacted by a college coach. 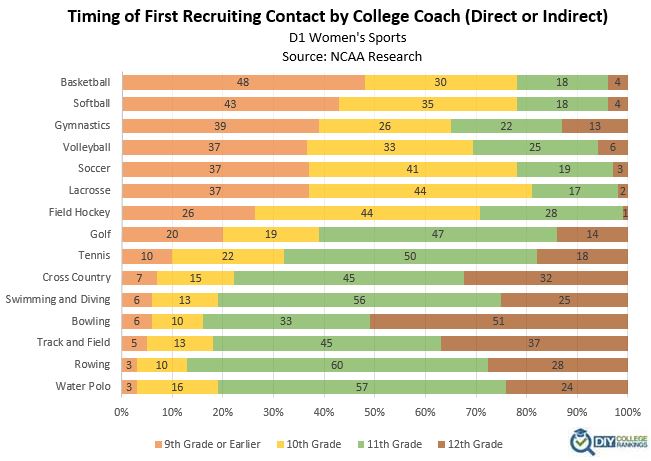 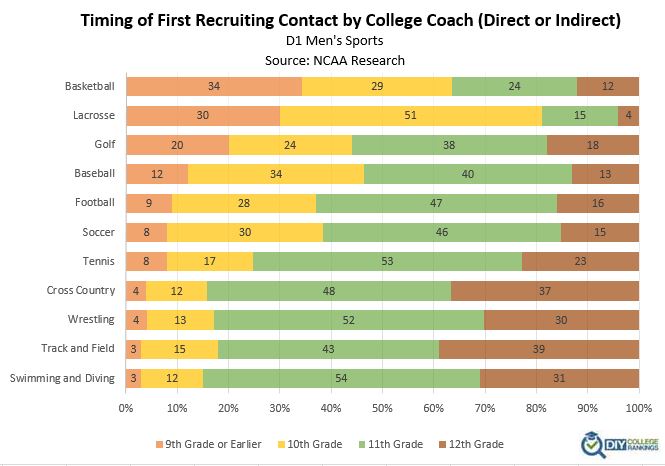 The survey found six sports where recruitment started on average in ninth grade. Lacrosse for men and Basketball, Softball, Soccer, Lacrosse, and Volleyball for women. For these sports, you can make the case that if you haven’t been contacted by a D1 coach by the end of your sophomore year, you should seriously consider your other options.

Approximately one in five D1 athletes said they didn’t get their first contact from a coach until their junior year or later. So it is possible to make it to a D1 school at this “late” stage. However, you’ve got to believe that you have more opportunities if you start earlier.

Everyone realizes that not all D1 schools are the same. The survey breaks down the average timing of verbal commitments by A5 (Power 5 Conferences) and non-A5 schools. The results show that men’s Baseball and Golf are committing to A5 schools as sophomores. For women, Golf joins the 10th graders signing verbal commitments.

The good news is that for those considering non-A5 schools, you probably won’t have to commitment until your junior year.

For those interested in playing at the D1 level, I strongly recommend going through the entire results. It includes information on official and unofficial visits as well as accuracy of their role on the team and the terms of the scholarship.

There is also a ranking of Factors in College Choice that has some interesting differences between men and women. Both ranked “Cost of College” as last. It would have been useful if the survey had asked if the athletes thought it deserved a higher position or not.