I know the college recruiting process can seem overwhelming. Maybe your kid made the high school team and is racking up stats that people are telling you are good enough for playing in college. So you start completing recruiting questionnaires on the various college athletic program websites. Or maybe making it to the college level was always the plan for your player and you’ve been focused on filling out as many recruiting forms as possible. But it can all be wasted effort if you haven’t completed five preliminary steps first.

The fact is that I highly recommend completing college recruiting forms. I just think too many families jump the gun and think if they just submit enough questionnaires, their kids will play in college. And the fact is that no one will be playing in college unless they figure out the finances first.

So here are five things you should do before you complete even one more recruiting form.

1. Understand the number of scholarships available.

And, oh yeah, there’s a good chance that the college of your choice doesn’t fully fund all of those allowed. So even the players receiving scholarships are only receiving partial scholarships with the exception of headcount sports. Parents need to understand that filling out more recruiting questionnaires isn’t going to change scholarship limits.

I realize that a lot of parents don’t want to discuss their finances with their kids. I get that. But at the very least you need to let them know how much you’re willing to spend on college. This allows them to plan for how much they’ll have to cover in terms of athletic scholarships, academic scholarships, or need-based financial aid. It means that they’ll know not to get too attached to a school before the finances are confirmed. This will allow parents to avoid sacrificing their retirement with the phrase, “if you get in, we’ll find a way to pay for it.”

Most need-based financial aid is based on your EFC. This is the amount families are expected to contribute to paying for college as calculated by the FAFSA or PROFILE. The EFC is almost always higher that people expect and should always be considered the minimum they’ll have to pay, not the maximum.

With the exception of D1 basketball and football, athletes can qualify for institutional need based aid. Furthermore, what happens if for some reason, the athlete is no longer on the team? Will parents be able to afford the school when their kids are just “students” on campus?

Very few colleges are able to meet full financial need. That’s why you’re EFC should be considered a minimum amount you’ll pay rather than the maximum. Families should use NPCs to estimate how much need the college is likely to meet. Since NPCs don’t have to provide an estimated EFC, it’s a good idea to have already used an EFC calculator. If you know your estimated EFC, you’ll have an idea of how generous the school is according to their Net Price Calculator.

This will obviously be important for D3 athletes but will apply to anyone receiving only a partial athletic scholarship. Some colleges are simply more generous than others with financial aid. This will also vary by need-based or merit-based aid.

5. Find out if playing in college is the ultimate goal.

Yeah, I know that I should have put this first but families should do steps two, three, and four for any student that is college bound. But if playing at the college level isn’t actually the athlete’s goal then you probably don’t have to worry about the number of athletic scholarships available. However, all parents need to keep in mind that playing the sport and being talented at it doesn’t necessarily mean their kids expect or want to play in college.

The reality is that they may love playing for social reasons and if it came down to picking between their “dream” college or one where they can play, they would prefer their dream college. Some would much rather go to a school with big time athletics even if it means they wouldn’t actually be on the team. If this is the case, instead of completing endless recruiting questionnaires, families can switch their focus to targeting non-athletic scholarships. 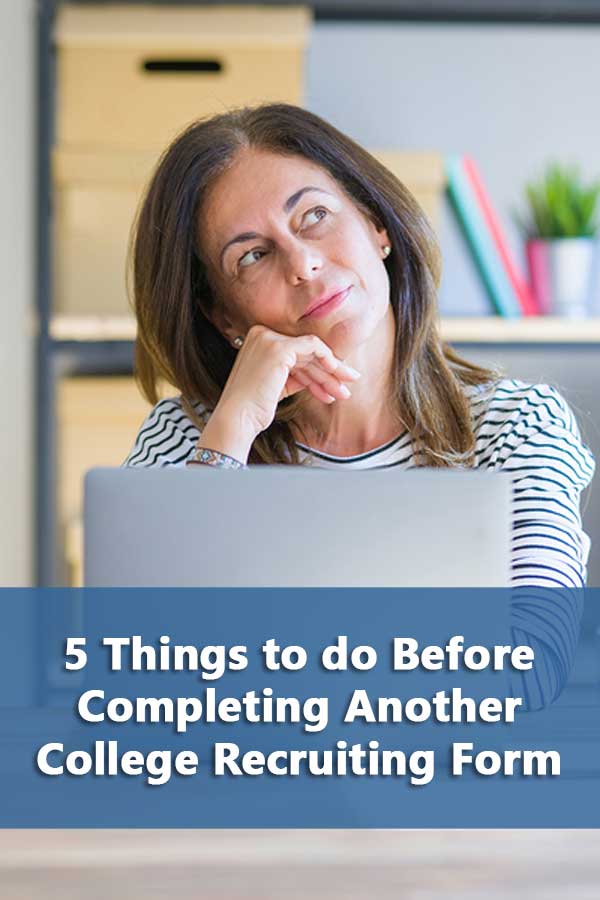