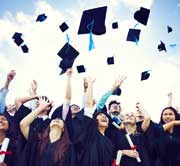 The idea behind listing 50-50 colleges is that they offer most high school students a reasonable chance of admissions with an equally reasonable chance of graduation. As I’ve mentioned before, the most expensive college is the one you don’t graduate from. And while depressing, a 50% graduation rate is actually a fairly high standard. Out of 1,586 colleges, only 458 have a 50% or better graduation rate. Even so, you have to wonder, how high of a graduation rate is possible while still admitting at least 50% of students?

It All Depends Where You Live

The highest 5-year graduation rate for public schools in each state ranges from 49% to 83%. There are 10 states where the public university graduation rate is over 80% and 23 where it is over 70%.

Some Are More Affordable Than Others

As I’ve mentioned before, simply being a 50-50 college doesn’t automatically make it an affordable choice. The 2014-15 average net price for the public schools on the list starts at $9,744 and increases to $24,992. The public colleges with the highest graduation rates in seven states have average net prices over $20,000.

For the private colleges on the list, the average net price ranges from $19,276 to $38,243. It includes 16 states where the school’s average net price is over $30,000. These are definitely not good bets for merit aid. At Elon only 50% of freshman receive institutional aid.

Not all are likely to provide generous need-based aid either. Only two public institutions, LSU and Indiana University, had an average net price of less than $6,000 for students with family incomes of $30,000 or less. However, another four, Auburn, South Dakota University, University New Hampshire, and Penn State, had averages of over $15,000 for the same category.

A total of 83 of the private colleges on the list had an average net price of $20,000 or greater for students in the lowest income category. Only one, Beloit College, had an average of less than $10,000.

The table below shows the public and private 50-50 college with the highest graduation rate by state. As usual, the 4-year rate is used for private colleges and the 5-year rate for public institutions. Subscribers to the newsletter can download a complete listing of all 50-50 schools.