So your first question is what would a homeschool mom know about how to get recruited to play college baseball? Simple, it’s like everything else in homeschooling–once our son decided that he wanted to play baseball in college we realized that we would have to figure out the process ourselves. A lot of what we learned can be applied to anyone trying to play college sports but the specifics here will be on baseball.

The next question is probably something like, “so what big scholarship did your son get?” The answer–none.

And here’s the first point about playing specifically college baseball, if you’re spending all that money on teams, traveling, lessons to get a scholarship, it would probably be better spent on SAT prep. The reality is that Division I schools are allowed 11.7 baseball scholarships while Division 2 get 9. One website takes that information and announces that means 5,423 scholarships in the NCAA alone!

But don’t sign up for their recruiting service just yet.

Stop and think a little about the 11.7 number. How many players does an average college team carry? That’s not 11.7 scholarships per year but for the entire team. Some teams carry more than 11 pitchers alone.

Coaches aren’t handing out full scholarships, they are giving 25%, 40%, or maybe if you’re really good, 50% scholarships. Unless you’re a left-handed pitcher with a 90 mph fastball, baseball isn’t going to provide your son with a full ride to college.

Pay attention to the numbers

Make sure you visit the NCAA’s page on the Probability of competing in athletics beyond high school. It has a great table showing the different sports and the numbers of players at each level. It shows 35,460 NCAA baseball players for those 5,423 scholarships. Of course, the players includes Division III players who receive no scholarships. But the scholarships include Division I and II schools that do not always fully fund all of their baseball scholarships. So chances are that there is significantly less than 5,423 scholarships available.

Some more food for thought about baseball funding your college education. The other numbers to look at are the percentage of players moving to the next level. The NCAA lists 7.3% of high school seniors as playing at the NCAA level.

Think about it this way, during a game only one player from the combined 9 starters for the two teams will be playing at the next level. Once you take into account extenuating factors such as that not all players will even try to go to the next level or the quality of the teams’ players, the actual number may increase to 3 or 4 for that specific game.

Now here’s something else to think about and it gets back to the original question of “what big scholarship did your son get.” Those players in the game who go on to play in college aren’t necessarily the best players on the field.

The ones who are playing in college fall into two groups. The first group consists of those who were considered top 100 blue chip prospects and have been on the coaches’ radars since tenth grade. Nice group to be in but most players are in the second group. This group is made up of players who figured out how to get themselves recruited, sometimes without a single coach showing up to watch them at a game.

It’s not just about talent.

In fact, it’s a lot like baseball itself. Everyone knows a few players who get away without having to work hard just because they are so talented (this isn’t going to last beyond high school). And then there are the players who get playing time because they always hustle even when other players on the team are just going through the motions.

If your son wants to play at the college level, he can’t just go through the motions waiting for someone to notice.

Will Recruiting Services Help You to Play College Baseball?

So what do you have to do? The “easiest” approach would seem to be to hire a service to take over the process for you–this is for people who have a couple of thousand dollars to spend.

But be aware of what the service provides and what you’ll still have to do. Depending on the service, they’ll put together a recruiting video from video you provide and send it to a bunch of college coaches. If you’re lucky, they’ll have more insight into what positions/players the college is looking for than you and target them appropriately.

The player will still have to call the coach himself.

The player will still have to provide the film.

The player will still have to take the SAT/ACT.

For a lot of families, it’s useful to have someone other than the parent telling the kid that you have to pick up the phone and make the call or that you need to practice for the SAT. There are plenty of people who use such services just for the college admissions process. It’s worth it to them so that the parent isn’t the one who has to do the nagging. But don’t think that you can’t do this yourself.

There are plenty of books and websites with information on how to do it yourself.

It’s not hard to find a timeline with the steps the player should be taking to advance the recruiting process. The trick is to start looking into the process before your son’s senior year! Even a recruiting service can’t change when coaches make their decisions about recruiting. Thinking about recruiting should start by the sophomore year. (The DIY College Rankings Baseball Spreadsheet can help.) This isn’t to say that if you’re a senior, it’s too late–it’s just a lot easier the earlier you start.

I offer this information just as a way to put all the resources I found on how to get recruited to play college baseball, some used, some not, in one place. Consider these some of the tools you can use to plan your trip through the process since the trip itself will vary from player to player.

As for my son, he had three D3 schools offer him a place on their teams. But more importantly, he quit the team before the end of his sophomore year because he wanted to be more involved in other aspects of college life. It’s important to remember that baseball, for a variety of reasons, could go away and the player needs to select a college that he’ll be happy at even if he’s not on the team.

What’s next? Read the following to learn more on how to get recruited to play college baseball: 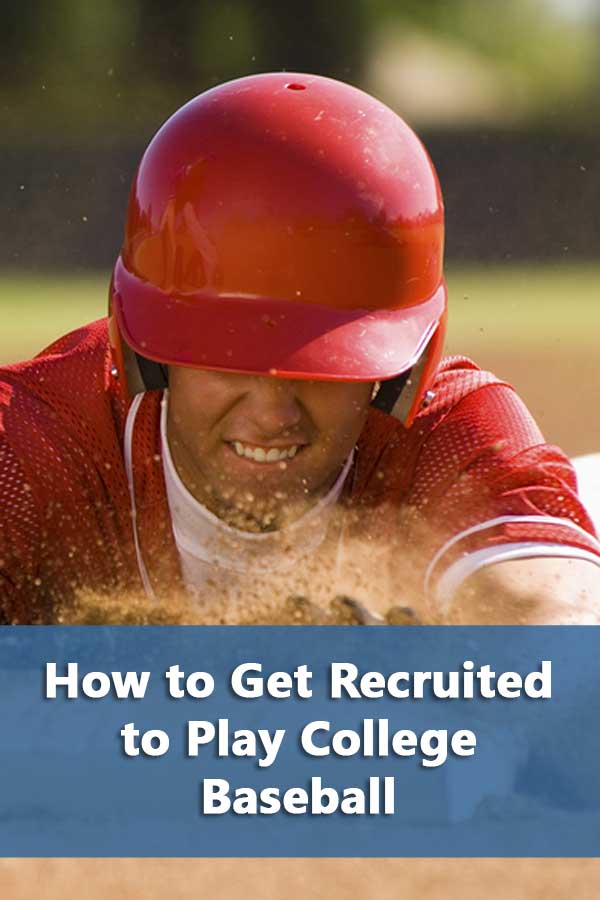