When entering the college baseball recruiting process, players need to target schools that are a match for their abilities. Prospective college athletes for most sports commonly use the NCAA Divisions to distinguish between athletic requirements and abilities. NCAA D1 is the most competitive for baseball and providing the most scholarships.

Of the 296 D1 baseball teams, the most are found in California with 24. Texas follows with 20, and North Carolina and New York tie for third at 18 each. Eleven states have 10 or more D1 Baseball programs. There are 8 states with only one D1 Baseball program and Alaska, Idaho, Montana, Vermont, and Wyoming don’t have any universities playing D1 Baseball.

Who Spends the Most on NCAA D1 Baseball?

The Office of Postsecondary Education collects information on college athletic financial information, including Operating Expenses which cover only “Game Day” expenses. The average in 2016, the most recently available year, was $376,833.

The University of Mississippi had the highest Operating Expenses at 2,204,808 and the only one over $2 million. There were 14 teams with expenses over $1 million with Texas A&M having the highest at over $1.5 million. These schools came from just four conferences, The SEC, Big 12, ACC, and PAC 12. Ten teams reported less than $100,000 and were members of the Metro Atlantic, Southwestern Athletic, Mid-Eastern Athletic, and Western Conferences. There were only 5 D2 teams with expenses less than $100,000.

Which D1 Baseball Colleges Have the Best Graduation Rates

The average 4 year graduating rate for the general student population at these schools was 43%. Unfortunately, they don’t make it easy to show the specific sports athletic graduation rates but you can read How to Find Student-Athlete Graduation Rates to, obviously, look up graduation rates.

The table below lists all D1 baseball teams based on information available from the NCAA, the Office of Postsecondary Education, and the Integrated Post-secondary Education Data System. Given the frequency of college changing conferences and the occasional change in division, the data is not going to be 100% accurate. Consider it a place to start. This data is part of the DIY College Rankings Baseball Spreadsheet which also includes test scores, acceptance rates, and financial aid information. 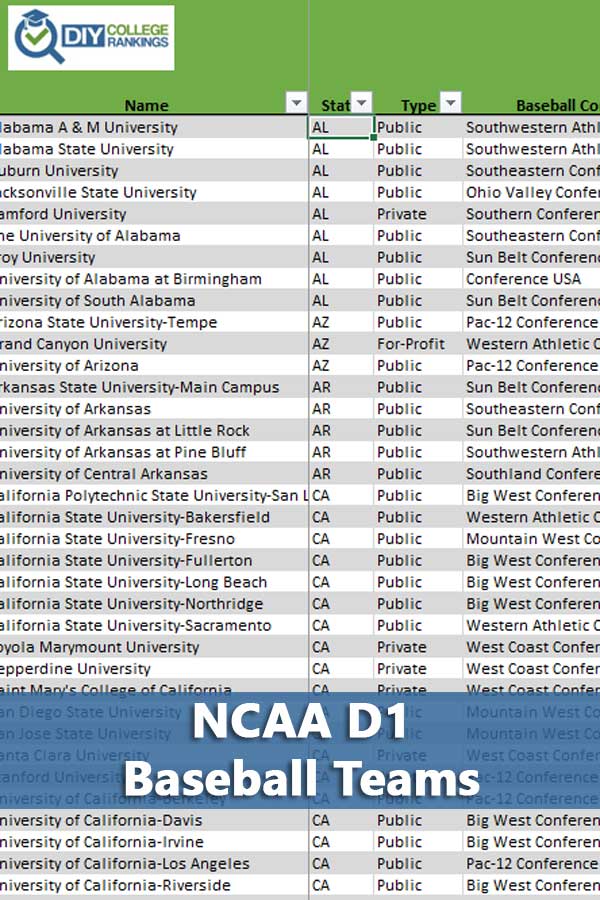