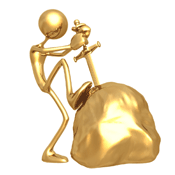 A couple of weeks ago I came across a link to an Time article titled: College Admissions: The Myth of Higher Selectivity by Dan Edmonds. I read it, thought about commenting because of the cherry picking of stats used, and then got over it and decided I had better things to do.

Then this past weekend I found myself reading College Admissions Misconception by The Ivy Coach, a blog by a private college counseling group that is “Making Ivy League Admission A Reality.” They show up on my RSS feed and I usually ignore it because the website blocks right-clicking in the name of copyright protection. Yes, their posts are so likely to get your into the Ivy League that they’ve disabled the right-click button to keep you from copying them.

Anyway, this weekend, I found myself without my regular computer and limited to my online tools so I read it.

It seems The Ivy Coach has a problem with a different Time’s post College Admissions: Ivy League Acceptance Rates Decline by Kayla Webly. Her post suggests that it’s becoming even more difficult to be admitted into the nation’s prestigious schools.

The people at The Ivy Coach, like Mr. Edmonds, think that all this focus on the number of people applying to the Ivy League doesn’t mean that it’s necessarily more difficult to be admitted. The post states (and I’m even more irritated with the blog since I can’t copy the text and I have to re-enter it myself which should give you some idea of how much this post annoyed me):

See, you don’t have to worry. It’s really not that more difficult to get into Harvard. The admissions people are just encouraging students of any caliber to apply to boost their stats for the US News College Rankings. So your little darling still has a reasonable shot at getting in if only you pay for our services.

Unfortunately, I couldn’t find historic admission rates for the Ivy League in the hour or so I spent looking for them. And I really shouldn’t spend a lot of time on this since if people want to give The Ivy Coach their money, that’s their problem.

So I’ll refer to the numbers I’ve already have in a post about this very issue of selectivity titled College Rankings and the Best Students. The short version, yeah, it’s harder to get into the “top” or most “prestigious” institutions than it once was.

Here’s my premise about selectivity and the quality of the increasing applicant pool. The general population has increased by 24% from 1990 to 2010. Now I don’t have the admission rates but I do have the class size (Full-time first year undergraduates) for 1990 and 2010 from the Integrated Postsecondary Education Data System and the following table is just for the Ivy League. 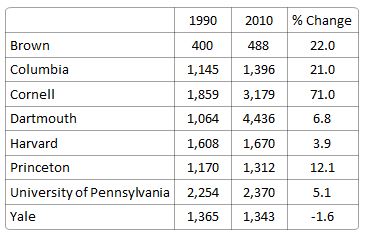 If you take Cornell out of the picture, which might not be unreasonable since it has a public school element not found in the others, only two of the schools have come even close to expanding their freshman classes to meet population growth.

So unless you think that there are proportionally fewer qualified applicants in 2010 then there were in 1990, five of the schools would have had to increase their acceptance rates just to account for population growth.

Then there’s that whole “students are applying to more schools” argument. Now I’m sure this plays a role but I suspect it doesn’t account for as much of the decline as some would argue.

And as for the quality issue ‘C’ averages-really? I do believe that there are Asian students who have brought lawsuits against some of the Ivy institutions for discrimination–something about having higher GPAs and test scores and still not being admitted?

Never mind that The Ivy Coach states elsewhere on its website that “gaining admissions is certainly about the numbers but there is so much more to it. If there wasn’t, students with perfect or near perfect SAT’s and straight A’s wouldn’t get denied by highly competitive colleges year after year.” Talk about mixed messages.

If I was into conspiracy theories, I could make this into a good one. See, it’s almost as if enough people are starting to believe that they don’t have a chance at being admitted to the Ivy League and its competitors that it’s affecting the number of people of applying.

And who are the people most affected by a decrease in the number of students applying to insanely competitive schools?

People who help them get into such schools.

People like Edmonds, who when not writing posts for Time tutors students for college tests. Or people at The Ivy Coach who will “help you navigate the college admissions process so that you receive the admissions decisions(s) of your dreams. ” (Did I mention that the site won’t let me cut and paste?)

I can see why such people might start getting a little worried. The number of students applying to colleges has peaked. Combine that with reduce demand for admissions to the Ivy League and they might not find enough people willing to pay their fees.

But I’m not into conspiracy theories, just numbers like graduation rates, cost of attendance, and the Baccalaureate Origins of Science and Engineering Doctorate Recipients. Numbers that show you don’t have to get into the Ivy League to get the best education for you.