There are two major delusions/misconceptions about paying for college that too many parents have. The first is that by not saving for college, parents claim this will make their kids eligible for more financial aid. Why bother saving if it means they won’t get any financial aid? This falls into the delusional category. I generally give people the benefit of the doubt but I can’t help but think this has more to do with preferring to spend money now rather than saving for later. Oh, FYI, financial aid doesn’t work that way.

The second is really a misconception that I can’t fault parents for having-scholarships will pay for college. By the senior year in high school, there’s every reason for parents to believe that their bright, high achieving seniors will be able to pay for college if they just apply for enough scholarships. There are easily a dozen different websites just to search for millions of scholarships worth billions of dollars.

So what exactly is my problem with private scholarships? Honestly, I don’t have anything against free money and if you get one-more power to you. But the truth about scholarships is that they will come nowhere close to paying for college for the vast majority of people. It’s simply a matter of numbers.

There’s this belief that if a student just applies to enough scholarships, she’ll be able to pay for college without going into debt. Here’s the perspective one high school junior, “scholarships are quite attractive in terms of funding.” And here are the regrets of a college graduate who believes that he wouldn’t be so deep in debt if only he had “viewed [scholarships] like jobs, could’ve been the highest paying jobs of my life…”

In fact, a survey by Accounting Principles found that a third of college graduates would have actively pursed more scholarships and financial aid options knowing what they now know about the cost of living.  Which goes to show while they obviously have learned something about debt, they haven’t learned much about scholarships or how to pay for college.

Show me the money

Let’s get back to the numbers. The National Scholarship Providers Association (NSPA) sponsored a Private Scholarship Count that was published in 2005. It found that “Approximately 7 percent of undergraduate students received private scholarships, with an average value of $1,982.”

It’s not likely the numbers have changed much since then. The College Board’s Trends in Student Aid 2018 report found lists “Private and Employer Grants” as making up 7% of all undergraduate student aid and 10% of all grant aid. This is more than the number provided by the NSPA study. However, this includes employer tuition reimbursement programs which are likely to be at least half of the category.

You could take this information as an argument that students aren’t applying for enough scholarships. After all, the NSPA study states the amount of aid that went unawarded “may be approximately $100 million annually.” If only students would take the time to apply!

What are the odds?

Forbes has a list of the “10 High Dollar Award Scholarships for College.” There’s the Buick Achiever’s Scholarship Program that offers a multi-year $25,000 scholarship-that’s singular, as in one person gets it. An additional 1,000 students will receive a one-time award of $2,000. So probably at least 1 in 1000 odds?

There’s the National Merit Scholarships where “At Auburn University hundreds of students apply for 6 elite scholarships which range from $2,500 – $7,500 per year over four years.” Room and board almost covered!

National finalists in The Siemens Math, Science and Technology Award Scholarships receive awards that range “from a low of $10,000 to a high of $100,000 for the first place winner.” Again, what are the odds?

I could go on through all 10 programs but the conclusion would still be the same, there is probably more competition for any medium to high value scholarship award than there is to get into Harvard. Any scholarship that a lot of people know about will have a lot of people applying.

Your best shot at a private scholarship is to go for the local ones that come through your high school guidance counselors’ office. Not as much competition but also not as much money. It’s going to take a lot of $500 scholarships to start making a dent in just your state tuition.

Of course, there are people who do collect enough scholarships to make it the equivalent of a full-time job. But they are definitely the exception rather than the rule.

Not ready to pay an extra house payment
a month for college?
Then you need to use the College MATCH Method.

They could hurt your financial aid

And just in case you’re wondering, students must report outside scholarships to the financial aid office. So yes, in a worst case scenario, students can work hard for outside scholarships only to find that none of it can be used to reduced their EFC. If you want to see how mess-up the system can get, read Poor Scholars Hit by Money Squeeze From Wealthy Colleges.

Where to find the biggest scholarship 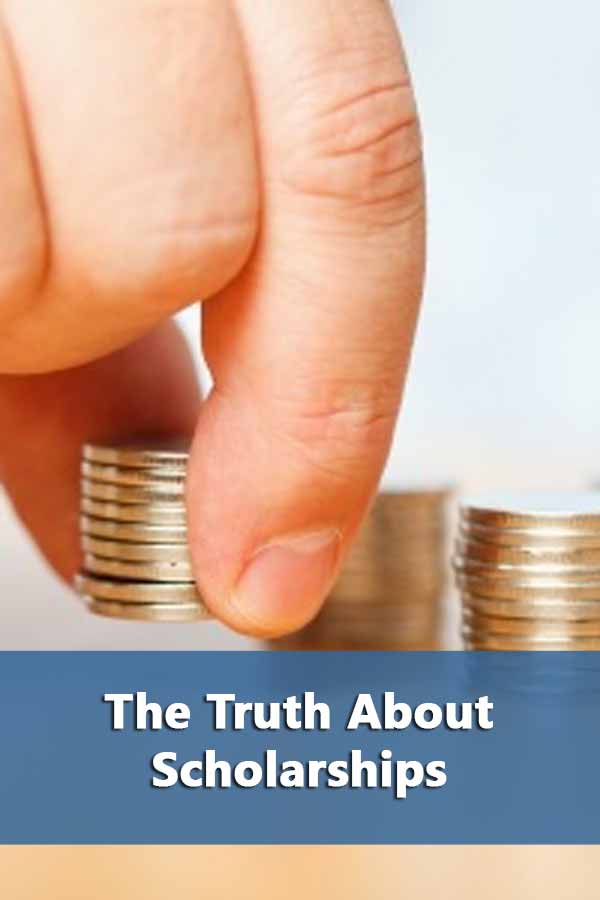