This post has been updated. I’ve added some camps, updated links, and removed some that don’t seem to exist anymore. If you have any suggestions, please let me know. (I list specific camps by date below.)

If at all possible, you want the coaches from the college you are interested in to see you play. This is a qualified statement since some colleges will recruit players strictly off video. These tend to smaller colleges or schools without any recruiting budget. Of course, all coaches would prefer to see you play and baseball camps can be a very effective way to get in front of several college coaches in a very short period of time.

Start with the Colleges

It is generally pretty easy to find college baseball camps for the major Division I baseball schools. You can find a fairly extensive list at CollegeBaseballCamps.com. But this still misses a lot of opportunities, especially for players who aren’t top prospects.

For example, the University of Texas at San Antonio offers various high school evaluation camps starting at $75. These camps offer players a quick way to see how they measure up against the competition to better gauge which colleges he should be targeting.

For those who end up targeting lesser known baseball schools, players and parents need to be prepared to do some research on their own. (See the DIY College Rankings Baseball Spreadsheet for more information) Many schools, even the smallest, will have some sort of high school prospect evaluation camp, usually in the fall or early spring.

Often, information about these camps won’t be posted until just a few weeks before the event. Therefore, it makes sense to get on the coach’s mailing list (by filling out a recruitment form) before the start of your junior year so that you will receive notices and know when to look for them the following year.

Getting in Front of Multiple Coaches 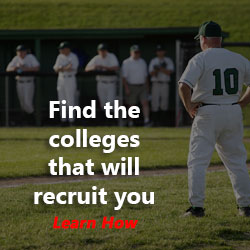 Another way to get in front of coaches is to attend a showcase event where multiple coaches will be present. Generally, these events are not organized by colleges but often take place on college campuses. Such camps will usually have a list of coaches expected to be at the camp giving you the opportunity to identify camps that will have the greatest concentration of schools you are interested in.

There are also colleges that will host a camp and invite coaches from other colleges to attend. However, the list of other coaches attending is not always available requiring you to contact the organizer for more information.

Don’t Waste Your Time and Money

Before you attend any event, it’s a good idea to contact the coaches and let them know you have video available. Usually, coaches have various ways of responding to let you know that they aren’t interested in recruiting you. Some may offer a detailed critique of your batting stance, but if you’re lucky, they’ll just say that you don’t fit their program, they already have three shortstops, or that they won’t be actively recruiting you.

Yes, I did say lucky. They have just saved you the expense of attending a camp and finding out then they aren’t interested. Of course, you can decide to go ahead and attend the camp in an effort to change their minds but at least you go in with the right expectations.

If you do attend a camp, contact the coaches that you are interested in before the camp to let them know that you will be there. That way they’ll know to focus on you since they don’t have to “sell” you their school. There may not always be opportunities during the camp to talk to the coach but make sure you introduce yourself to the coach at the end of the camp and ask questions.

Make sure you also pay attention to the results of the different evaluations or metrics if available. Some showcases will list all the players by position and the different metrics measured. For pitchers and catchers especially, this can be a good way to figure out where you stand compared to other prospects and target colleges appropriately.

Put in the Extra Effort

These are some of the camps/showcases/combines that have multiple college coaches and/or pro scouts. The locations listed indicates the area where the camps take place, not necessarily the geography of the college coaches that attend.

These organizations offer camps nationally. However, the colleges participating may be regional or national.

Baseball Factory Team One Baseball: Hosts camps but doesn’t list colleges attending only that results will be in a database accessed by subscribing college coaches.

Best in the US: Offers camps nationally. Lists colleges attending.

These camps are only offered regionally. However, the participating colleges may not be limited to just regional colleges.

College Baseball Showcase Camps in Missouri and Kansas: list camps in region being sponsored by colleges.

Crossroads Baseball Series:  Appears to be midwest. Coaches are not listed.

Diamond Skills Baseball Camps: Washington DC and Bethesda, Maryland area. Offers winter camps for high school players. Lists coaches and professional teams that have attended in the past but does not indicate which are currently expected to attend. 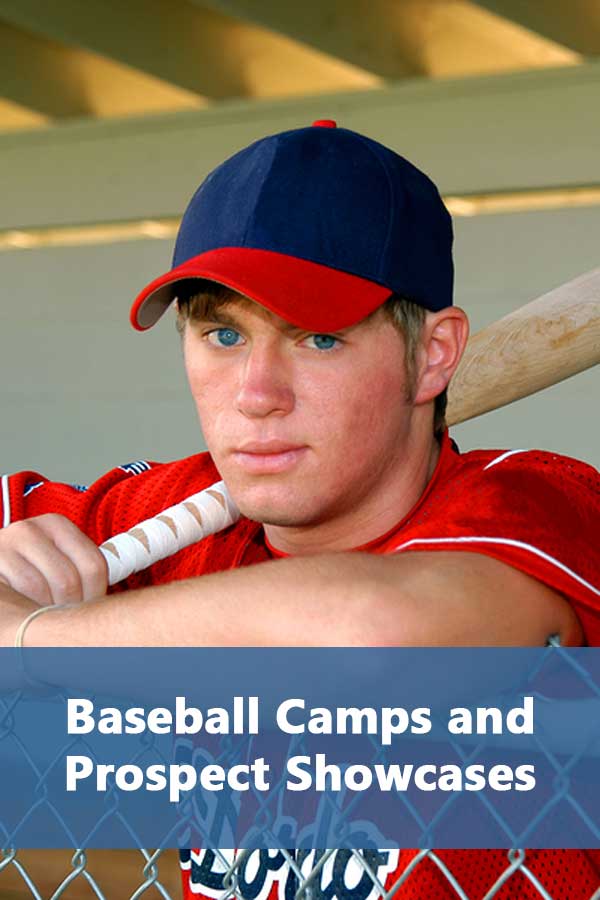