The idea behind the 50-50 school listing is to identify colleges that meet a basic standard, graduation rates, while accepting more students than they reject. However, acceptance rates of 50% or better do not guarantee accessibility for many students. The fact is that the majority of the 50-50 schools are private and not all are generous with their financial aid.

Approximately 70% of full-time students attending four-year colleges, are at public universities and colleges. The United States as a society has looked to its public universities as the great equalizer, providing access to a quality higher education for those who couldn’t afford it otherwise.

Never mind the fact that with the cost of attendance at many state institutions exceeding $30,000, they may not be as accessible as they once were. Ultimately, if students don’t graduate, there is no “equalizing” benefit. Of the 691 public four-year institutions with 500 or more undergraduates in the United States, only 217 report a five-year graduation rate of 49% or better. Of those, 34 accept less than 49% of students.

Overall, New York (excluding military academies) and Pennsylvania have the most colleges graduating at least half of students in five years with 20 schools each. California is next with 18, and Virginia, Massachusetts, and North Carolina follow tied with 10 each.

Of the schools reporting five-year graduation rates, Texas has the most public universities where less than half of students graduate in five-year for a total of 28 institutions. Ohio is next with 24, followed by Pennsylvania with 19, and Georgia and New York with 18 each.

The following table lists public four-institutions with 500 or more full-time undergraduates and a five-year graduation rate of 49% or better.

Public Universities Where at Least Half of Students Graduate 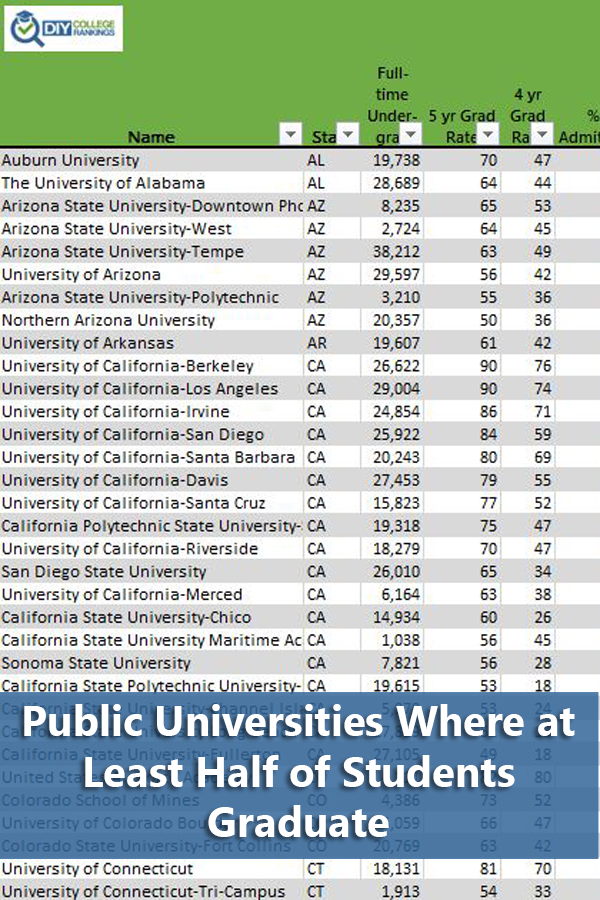